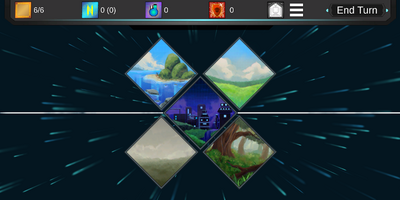 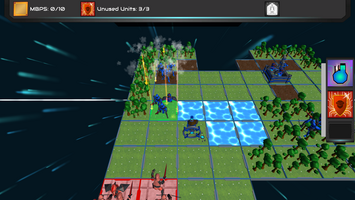 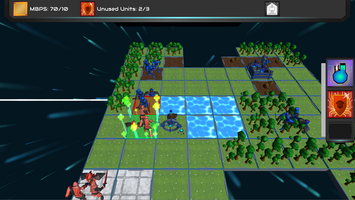 Well it’s finally here… spells have been added in Net King’s Call V0.2.2! This handy feature will allow you to deal damage and heal your army outside of combat. We’ve even included non-placeholder effects! Currently we have “Minor Healing” and “Rain of Arrows”, but we’ll eventually want to expand into more interesting “magic”. What that will be will come in time, and while we have a few ideas, if you want you can comment and send us what you think would be cool to see. We appreciate all the feedback we can get and we’re open for discussions!

Aside from all of that, Net King’s Call V0.2.2 has also switched up fonts, meaning we’re not using any old generic serif anymore! We hope that this will better support the futuristic feel, and won’t be an eyesore when reading through our dialog.

Lastly, there’s been a reduction in size for some of the UI, mainly the squad panel in the strategic/mission scene. After working on this game for a year, we’ve realized we’re not making a mobile game, and that the UI should be smaller. Expect to see more adjustments like this soon.

+Added “Spell System” to the strategic/mission stage, on the right side of the screen click the grey bar to slide the menu out.

+Added Minor Heal and Rain of Arrows, two spells which heal for 10 hp and deal 10 hp worth of damage respectively.

+Switched out the fonts.

-Player sometimes can’t switch to support units on death in the battle scene. This has been known for a bit and we have to fix it. Yell at us if it breaks for you.

-Swordsman occasionally gets stuck while charge attacking on the other side of the field. Only returns if it is able to slash again.

-The player can “capture” buildings they already own, but this doesn’t do anything when captured again.

-On a unit’s death in the battle scene, it may appear that they still have a small bit of life left on their health bar.

So we’ve finally given it a name (sort of), we’re sticking with “spells” for now. As far as we know, they work as intended, and we hope they stay that way. But of course, that will never be the case when it comes to game development. As far as what we’ll add next, I’ve heard “Fireball” enough times to say “sure why not?”. But in all seriousness, the possibilities are endless. We could create teleporters, temporary units, environmental hazards, etc. It would be interesting to unveil something bizarre for the next build!

Special thanks to our moms!

It was recently Mother’s Day, so we took a break. If you’ve been following these devlogs, they usually come out on Sundays, but not on Mother’s Day. We hope you said thanks to your mum, and if you didn’t go do that now.

Special thanks to our artists!

As we have mentioned before, we’ve been working with some artists that are really bringing the Net King’s Call world to life, so we just want to shout them out here! If you’re interested in their work we’ll link them here.

Christina Locopo is doing 2D illustrations for us, but she also does character art and animation! Check her out on Twitter and Instagram!

While sitting down to design our tutorial, we also talked about how our quests will function in more detail, and what sort of quests will be in the game. Now that we have an official list, we can begin to implement them into the game!

If you haven’t heard of a company called VoxPop Games and are a streamer, game developer, or PC gamer, keep reading. They’re creating a brand new online distribution platform for video games, similar to Steam, Itch.io, Gamejolt, etc. The goal of this platform is to create a new source of revenue for streamers with a peer to peer model. Streamers and users can promote games, while developers can set aside future gains for these groups in order to get more exposure, helping everyone in the process. Of course the people at VoxPop know better than we do on this subject and you can find them linked below. We’ll be putting up our free demo on VoxPop when they launch!

Thanks for reading through our devlog! We hope you enjoyed playing Net King’s Call V0.2.2, and if you haven’t tried it yet you can download this build on our itch.io page (which we’ll link below). Also, if you want to follow our development, you can join us on Discord, follow us on Twitter, and subscribe to our mailing list. A link to our Discord server will be posted below, and feel free to ask us any questions or send us any feedback you may have!