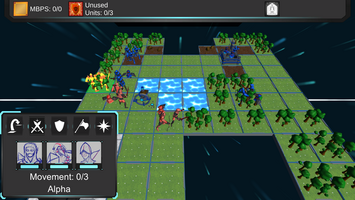 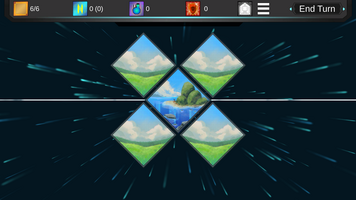 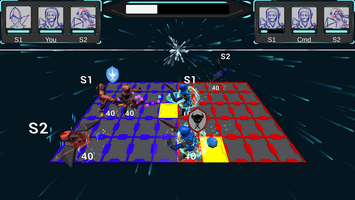 The last couple of weeks we’ve been collaborating with a few artists to roll out new assets for Net King’s Call V0.2.1, and we’re happy to give a glimpse into what some of it will look like! If you’ve played in the Overworld, you probably remember a bunch of placeholder, solid color diamonds representing our territories. Very soon, we’ll have each territory type illustrated so that you can see what you’re getting into beforehand. Aside from the obvious gameplay reasons for this, it also just adds more life to the Overworld.

Perhaps even more exciting, we’re in the process of adding new tile types to change up gameplay in the Strategic Mission stage. With the inclusion of trees, a new tile type has already been added which we simply call the “forest”. This tile costs two movement points to get through, making it harder to get through. On the plus side, ranged attacks will deal less damage to your squad while you’re inside it.

+Added a new highlighting indicator for when the player has selected a squad on the Strategic Mission map. They will now glow according to their team color.

+Added new “forest” tile to the Strategic Mission map. It costs two movement points to get through, but will provide a cover bonus to squads standing inside.

+Added new UI and icons to the Strategic Mission Map. The “Unused Units” indicator at the top shows players how many squads have yet to use their movement or capture a building (if appropriate). When the icon is clicked, the player will automatically select a squad that has not used it’s movement.

+Data Wheels heal squads standing within it 10% of their max health every turn.

+Changed the demo map to include forest tiles.

+Tiles retain their models between stages (a group of trees on a tile won’t change models when loading in and out of battle).

+Fixed a critical bug when an enemy squad targeted a player unit, but if the player unit suddenly became inaccessible, the game would crash or the turn would not move on.

-There’s a known bug with the squad’s movement highlighting based on their total movement, not what they can access (notable when crossing forest tiles).

-There’s a known pathing issues when playing on maps where buildings are separated on islands, with NPC units trying to get to them (but they can’t because they can’t cross water or empty tiles). Could actually be fixed, we need to test this more.

-There’s a bug in the Overworld where units in the processing queue will not show their appropriate turns before being finished.

Over the last couple months there’s been a lot of discussion on what this system should look like, what it should be named, and what exactly is going into it. At this point we have coded the system into the game (although it’s not accessible in the demo), and we’re testing some new commands. The two commands we’re testing are pretty simple being a “Minor Heal” and “Rain of Arrows”. While it should be obvious what they do, Minor Heal restores 10 HP to all units in a selected squad, while Rain of Arrows will deal 10% damage to all units in a squad.

We hope that in our next update, at least these two commands will be in the game for you to enjoy. Over the course of the next two weeks, we will be designing new commands. If you want to give us feedback on our design decisions, or throw in your own suggestions, let us know on this post or on our Net King’s Call Discord Server!

Special thanks to our artists!

As we mentioned earlier, we’ve been working with some new artists and we just wanted to shout them out here! If you’re interested in their work we’ll link them here.

Christina Locopo is doing 2D illustrations for us, but she also does character art and animation! Check her out on Twitter and Instagram!

Additionally we also have a fiverr artist known as Spark3Dvision who is creating some great UI art for us. You can find her work and contact information here!

While sitting down to design our tutorial, we also talked about how our quests will function in more detail, and what sort of quests will be in the game. Now that we have an official list, we can begin to implement them into the game!

If you haven’t heard of a company called VoxPop Games and are a streamer, game developer, or PC gamer, keep reading. They’re creating a brand new online distribution platform for video games, similar to Steam, Itch.io, Gamejolt, etc. The goal of this platform is to create a new source of revenue for streamers with a peer to peer model. Streamers and users can promote games, while developers can set aside future gains for these groups in order to get more exposure, helping everyone in the process. Of course the people at VoxPop know better than we do on this subject and you can find them linked below. We’ll be putting up our free demo on VoxPop when they launch!

Thanks for reading through our devlog! We hope you enjoyed playing Net King’s Call V0.2.1, and if you haven’t tried it yet you can download this build on our itch.io page (which we’ll link below). Also, if you want to follow our development, you can join us on Discord, follow us on Twitter, and subscribe to our mailing list. A link to our Discord server will be posted below, and feel free to ask us any questions or send us any feedback you may have!